Over recent years it has become a disturbing reality the necessity for government facilities, foreign businesses, international corporations, Air & shipping ports, humanitarian support to protect their facilities and assets in developing countries or remote and hostile environments by the implementation of a trained static guard force.

The disturbing reality is the world today is unpredictable and continuously changing and in recent years has seen a number of governments ousted and military interventions in countries in Asia, Middle East and Africa. These changes have resulted in an upsurge in civil unrest, para-military groups attacking international businesses and organisations, ethnic tensions between religious groups and attacks from organized criminal and terrorist groups throughout the world.

Media reporting has shown how vulnerable and unprepared for unexpected situations foreign embassies, international businesses & corporations are to a criminal or Para-military attack, resulting in the increasing necessity for government facilities and international corporations to enhance their security policies and procedures by the implementation of a trained static guard force.

Depending on your specific requirements and country your business or operation is located in, SSDS provide not only highly trained British security mangers and guards we also utilise the skills and adaptability of European personnel. Our static guards are highly trained in subjects such as: Security Awareness, Electronic & Technical Surveillance Systems, Access Control, Medical Training, Communications, Weapons, Self-Defence and Emergency Procedures. This level of training enables our static guard force to provide the highest level of defensive security to your facilities or operational compounds.

Notice:
In our experience and depending on the country we are operating in and the government legislation and law, the use of external security can be denied leaving our second option. SSDS can implement a local National Guard force in the country of operation, overseen, managed and trained in SSDS procedures by highly trained SSDS consultants. 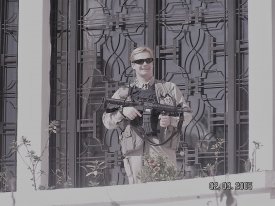